Preface (Dispersing Blame): Often, us writers are asked to cover unusual topics or events. Sometimes these assignments are so out there, a writer can’t help but wonder if they’re being fooled into setting themselves up for career-sinking public cancellation.

Doubly so when the management figure requesting the work is aware of the author’s affinity for edgy – some might say “offensive” — humor, as well as saying things they don’t necessarily mean if it might get a reaction.

Why goad that person into exploring subject matter that could prove disastrous if handled clumsily, if not to see them self-immolate professionally?  I suspect that’s what has been done to me here.

As a result of the aforementioned treachery, I’m examining which activity is harder:

24 Hours of Le Mans or 24 hours of Lamaze Breathing Technique?

Aside from their similar-sounding names and equal lengths of time (for the purposes of this piece), the two don’t have much in common. Thankfully, online sportsbooks offer betting lines for everything these days!

So, let’s talk about what exactly it is we’re comparing: two very different ways to spend 24 hours.

Racing a car – often at extreme speeds – for 24 hours straight, or enduring all the trials and tribulations associated with giving birth over an equal length of time?

The 24 Hours of Le Mans is one leg of the Triple Crown of Motorsport and the oldest ongoing endurance event in auto racing. Due to the length of the race, it poses a significant challenge to car manufacturers and drivers alike.

Only the finest automobiles can sustain nearly constant high speeds for 24 straight hours without breaking down entirely. If only cars could do Lamaze breathing to reduce their stress and improve performance.

The same goes for the athletes inside the vehicles. Each car is shared by a team of three drivers, who must pilot their machines at velocities reaching 205 MPH for over two hours a time.  Relief drivers take over during pit stops, allowing the person subbing out some time to eat and rest. This goes on for the entire day.

Imagine how exhausted those drivers must get.

Assuming each teammate reaches the two-hour mark behind the wheel, you’re never resting for more than four hours. That’s not a lot of time to sleep, especially when performing tasks that require maximum reaction time and focus.

Please Note:
Humans are meant to sleep for eight consecutive hours to fully recharge; Le Mans drivers only get a few hours of rest at a time, spread out over 24 hours. The high-speed endurance race puts such strain on drivers, new rules had to be instated in the 1990s to reduce the effects of fatigue on participants. Today, drivers cannot operate their car for over 240 minutes of any six-hour period.

Nobody on the team is allowed to exceed 14 driving hours total. Furthermore, under certain conditions, officials may restrict drivers to 80 consecutive minutes behind the wheel before they must rest for 30 minutes minimum.

What’s so challenging about a car race with so many helpers and safety regulations? Well, the drivers are pushing their vehicles at maximum throttle around roughly 85% of the nearly 8.5-mile course. Other portions are met with gradual curves or sharp turns.

The deadliest 24 Hours of Le Mans (1955) saw French driver Pierre Levegh killed in a crash that sent his car flying into the spectator’s area where it killed 83 people in attendance and injured 180 more.

Still, when it comes to the comparison being made on this page, 24 Hours in Le Mans may suffer from all the changes made in the name of safety.

In 1988:
Roger Dorchy was timed rocking his WM P88-Peugeot at 252 MPH. Today, limits on the lengths of straights have forced the top speeds down around 205 MPH.

There are larger teams of drivers, stricter rules regarding driver rotations, and the track avoids populated areas – they don’t even enter the town of Le Mans anymore!

“Women be milking that baby thing too…It can’t be nearly as bad as playing a basketball game on a sprained ankle.”
— Charles Barkley on TNT’s Inside the NBA


When Charles Barkley made his famous “baby thing” quote, he – like me – was probably ignorant to some of the harsher realities of childbirth.

We all know about Lamaze breathing and the basic baby delivery stuff – which isn’t exactly pleasant – but in October 2021, midwives at the Royal Oldham Hospital, in Lancashire, England sent chills down spines all around the world when a picture of one of their art projects went viral.

The image – which was shared and commented on tens of thousands of times across social media platforms — featured an arrangement of pumpkins with open mouths, each growing wider than the last, with corresponding looks of horror on their faces.

Please Note:
They were carved to demonstrate the circumference of a woman’s cervix during various stages of dilation, providing a visual representation of the violent bodily mutations awaiting expecting mothers in the delivery room.

How much relief could Lamaze breathing possibly offer while parts of your pelvis are behaving like the rear door on a military cargo jet?!

After seeing the gaping gourds:
I think all C-section babies should sent their mom a “you’re welcome” text for having had the decency to arrive in this dimension without turning them into a human Sarlacc Pit (the thing that ate Boba Fett in Star Wars: Return of the Jedi).

Surely, having your guts removed for your newborn’s alternate escape route is preferable to whatever’s going on with those last pumpkins. 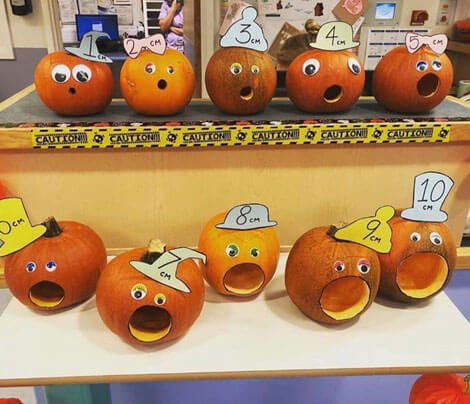 Sure, there are cheat codes like epidurals that eliminate the pain associated with one’s lady parts expanding to a size capable of accommodating a bowling ball, but that stuff wears off.

Then what?
Are there Lamaze breathing techniques for post-partum pain? Plus, from what I understand, the process leaves all kind of damage to recon with when you regain feeling.

I won’t go into details, but a baby bulldozing through that area leaves all sorts of stuff torn and mangled for months after the deed. And hemorrhoids.

How could a car race ever come close to approaching that level of physical exertion?

If there was a race that required men to pass a nickel-sized kidney stone through their unit while simultaneously blowing out their brown eye, we’d have a fair comparison. And it’d be mighty hard to find participants.

As recently as 2017, the World Health Organization estimates that 300,000 women died from pregnancy-related causes in a single year – 808 women per day.

How can an auto race compete with those stats?

Even during the race’s most tragic moments, Le Mans has always fallen well short of those mortality numbers.

Please Note:
If the drivers ever managed to mow down 300,000 spectators, it would be an international incident, and one of the bloodiest tragedies in human history.

Everyone involved would surely be arrested for unleashing Carmaggedon and spending however long it would take to run down such an enormous number of misfortunate bystanders.

Not to mention the mechanics and engineers who’d be guilty of premeditation for equipping the vehicles the many upgrades required to keep them plowing through piles of bodies without wrecking or getting stuck.

I imagine the kinds of brutal technology needed for such a task are very different than what’s useful to maximize the distance driven in 24 hours of Le Mans.

Side Note About Numbers:

Yes, I realize I should be looking at these two activities’ deaths in proportion to their total number of participants/occurrences, respectively. This comparison isn’t meant to be that serious, but what the hell?

The calculations aren’t perfect, but they prove my point – and in 2022, everyone knows statistics only exist to confirm our preconceived biases.

Anyway, go look at those last few pumpkins again. How do you compete with the human body mutating to the point of being able to accommodate an entire Thanksgiving turkey? Lamaze breathing or no Lamaze breathing, that is truly an impressive – if not terrifying — physical feat.

As for the 24 Hours of Le Mans — wow, you drove for 24 whole hours with the help of a pit crew, state of the art technology, and two other drivers? Truck drivers go for longer with shottier vehicles all the time, and without any teammates to help take the wheel. The only partner they need is meth.

You think I’d say 24 Hours of Le Mans is harder than 24 hours of Lamaze while in labor? No way. Being a contrarian isn’t worth attracting the scorn of any creature that can endure whatever happened to those poor pumpkins.