The St Louis Cardinals are in LA to take on the Los Angeles Dodgers in game 1 of the NLDS.  The Cardinals finished the season with a 91-71 record, winning the NL Central division.  The Cardinals finished off the season 2-8 in their last ten, but those were games in which they rested some of their top players.  The Dodgers placed a top of the NL with a 95-67 record, including a 50-31 home record.  The Cardinals are sending Chris Carpenter to the mound in game 1 tonight.  Carpenter went 17-4 in the 2009 season posting a 2.24 ERA.  The Dodgers are starting lefty Randy Wolf in game 1.  Wolf had a record of 11-7 in the regular season with a 3.23 ERA.  Game 1 of the Cardinals vs Dodgers NLDS should be a good one!  Betting lines, predictions, and trends for this game are below.

Click on the above button to bet on Cardinals vs Dodgers at Bodog! <- America’s most popular online sports betting site.

Over/Under – This over/under line is tough at 7 total runs.  Bet the OVER 7 runs in this Cardinals vs Dodgers game.  The over is listed at +105, which is pretty good value for two teams that can hit.  Look for a tight game that will be sitting right around the 7 to 9 total run mark.  Bet the OVER.

Bet on Cardinals vs Dodgers online at www.Bodog.com now! 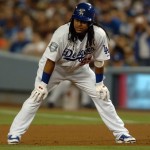