The Dallas Cowboys (2-1) Travel to Mile High Stadium to take on the unbeaten Denver Broncos (3-0) in a Sunday afternoon match up scheduled for 4:15pm ET. The Dallas Cowboys got an ever important first win at the new Cowboys Stadium Monday night against the Panthers and can now focus on an important game against the Denver Broncos, where they will be without star running back Felix Jones. Tony Romo will need to get it done in the air against this number two ranked Broncos pass defense. The Denver Broncos, led by rookie head coach Josh McDaniels have come out strong and have won their first three games by dominating the defensive and rushing game, taking the pressure off of quarterback Kyle Orton. The Denver defense surprisingly leads the NFL defensive ranks, holding opponents to just 214.7 YPG and only giving up 5.3 points per game, they will need to have another outstanding game against Tony Romo and the Dallas Cowboys to remain unbeaten. Betting lines, trends and predictions are listed below for this Dallas vs. Denver week 4 match up.

Spread – Lay it down on the Cowboys to cover the 3 point spread this week. Now that the pressure is off of The Cowboys to win in the new Cowboys Stadium, watch for Tony Romo to come into Denver on fire and prove to all the critics that he is one of the best quarterbacks in the NFL. Marion Barber is expected to return to the line up Sunday and will look to carry to Cowboys to a third straight game with 200+ rushing yards. I believe this overrated Broncos Defense, who have faced to weaker opponents the last two weeks, will not be able to beat the three point spread against a powerful Cowboys offense. Bet on them to cover the spread.

Bet on Cowboys vs Broncos at www.Bodog.com! 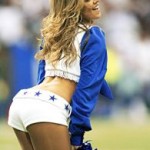