In this Sunday match up, scheduled for 1:00pm ET, The Pittsburgh Steelers (2-2) head to Ford Field to take on the Detroit Lions (1-3). The Steelers will play its first game at Ford Field since their Super Bowl victory in 2006. The Steelers will need to on focus finishing the game and playing all four quarters, as they have been outscored 45-13 in the fourth quarter in their first four games this year. The defending World Champs, who are possible the best 2-2 team in the NFL, will need another big game from Roethlisberger, to give The Steelers their first victory on the road this year, against this struggling Lions franchise who may be without starting quarterback Matthew Stafford. It appears Daunte Culpepper will get the start as quarterback after Stafford injured his right knee in Week 4 against The Bears.  Culpepper will need to find some magic to beat the Steelers, and give the Lions their second victory this year. Betting lines, trends and predictions are listed below for this Pittsburgh vs. Detroit week 5 match up.

Spread – Lay it down on the STEELERS TO COVER the spread this week. Look for back-up running back Rashard Mendenhall to have another 100+ yard game as Willie Parker is expected to miss another game. Also watch for Big Ben and his two star receivers, Holmes and Ward, to pick apart this poor Lions secondary putting up some big numbers in the air. Bet on the Pittsburgh Steelers to cover the 11 point spread (-110).

Over/Under – I like the total to go over the 44 points. The Steelers coach Mike Tomlin is fading away from the old Steelers run/defensive style football and is giving Roethlisberger a chance to win games with the ball. I look for the Steelers offence to control this game and put up a lot of points on the board. The Lions defense has allowed an average of 33.5 points per game, look for this strong Steelers offence to match or beat this number, bringing the total over the number. BET ON THE OVER 44 points in this one (-110).

Bet on this Pittsburgh Steelers vs Detroit Lions game at www.Bodog.com now 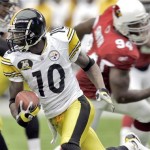