Post-positions have been drawn and the stage has been set for the 142nd running of the Belmont Stakes on Saturday, June 5, post time at 6:30 p.m. EST. For the first time since 2006 and only the third time since 1970, neither the Kentucky Derby winner nor the Preakness Stakes champs are parts of the field.

With Derby winner Super Saver and Preakness winner Lookin’ at Lucky being no-shows for this Saturday’s event, the absence of a heavy favorite makes for a bettor’s delight in this wide-open 1-½-mile marathon.

Who will go the distance? Let’s take a look at the horses and their respective riders in order, starting from the rail.

Dave in Dixie, Calvin Borel (20/1): “Bo-rail” will start from the inside position and is likely to never leave it. He will no doubt be looking to redeem himself from last year’s poor showing at Belmont, but will have some work to do aboard this long shot whose only race on dirt began with an inside trip and ended 16 lengths back of the winner. It’s a crapshoot to think Dixie will have any chance on Belmont’s fast dirt track. Pace is the deciding factor, and he looks to be no factor whether it is a fast or slow.

Spangled Star, Garrett Gomez (30/1): Can Gomez shake the monkey of being one of best jockey’s never to win a Triple Crown race? Probably not on this long shot, who is easily the most unlikely to win this one. His best effort was his last out in the Grade III Withers where he finished ¾ lengths behind the winner Afleet Again. The colt has never competed over a distance longer than 1-1/16 miles, and doesn’t’ look to be a factor in this one.

Uptowncharlybrown, Rajiv Maragh (10/1): Maragh rode Brave Victory to a seventh-place finish in the 2009 Belmont Stakes, his first mount in a Triple Crown race. Now he will get a chance to better that performance on a horse that has the goods. He sped out to two dominating victories to start his career in impressive fashion, but then fell short in his Kentucky Derby prep races and failed to meet the qualifications based upon Graded Stakes earnings. At 10-1 he is a good bet to show.

Make Music For Me, Joel Rosario (10/1): Rosario who rode Make Music for Me in the Derby will retain the mount for Belmont. This horse is a deep runner who will need a very hot pace for his late closing style. He was winless in six starts as a juvenile, but finished second in the Best Pal and Del Mar Futurity, as well as third in the Cash Call Futurity. In his only start in 2010, he won the Pasadena Stakes on the Santa Anita turf on March 6. In the Kentucky Derby he finished 4th just 4 3/4 lengths back. This is one of the hardest horses in the race to project, and a definite wildcard.

Fly Down, John Velazquez (9/2): Velazquez earned his first win in a Triple Crown in the 2007 Belmont Stakes, when he rode Rags to Riches to a victory, making her the first filly to win the race since 1905. Now he will mount one of this year’s favorites. Fly Down won an allowance at Gulfstream in February, followed by a ninth place finish in the Louisiana Derby and then a win in the Dwyer Stakes at Belmont Park in early May. He is one of two Zito entries, and with his breeding, the 1-1/2 mile distance should not to be as much of a problem for him as it may be for the 11 others in the field.

Ice Box, Jose Lezcano (3/1): Lezcano rode Ice Box to a fast-closing second in the Kentucky Derby in his first ever ride in the Run for the Roses, and will now look to improve upon that finish this weekend. Another Zito entry, this colt is the early favorite and seems to be getting better each and every time out. A hard closing finisher like Ice Box should bode well on this 1-1/2 monster providing the pace is fast from the start.

Drosselmeyer, Mike Smith (12/1): Smith replaces Kent Desormeaux aboard Drosselmeyer, a colt that didn’t have the graded earnings to make the Kentucky Derby. But he’ll finally get his shot at a Triple Crown race in the Belmont. He finished third in the Louisiana Derby, followed by a second place finish in the Dwyer behind Fly Down in his last out. With his last two efforts leaving something to be desired, he does not appear to be a strong contender to go the distance.

Game On Dude, Martin Garcia (10/1): Garcia took over the horse two races ago and after turning in a decent effort in the Derby Trial, the Preakness-winning jockey won the Lone Star Derby by a solid 4 1/2 lengths aboard this Bob Baffert trainee. This combo is a serious contender to win this one.

Stately Victor, Alan Garcia (15/1): Garcia rode the 40-1 colt to an impressive win in the
Blue Grass Stakes, but then followed up finishing eighth, 8-3/4 lengths behind Kentucky Derby winner Super Saver. He was never much of a factor in that race, and dirt is a huge question for him. While he is yet another closer in a race full of closers, he does demonstrate enough early speed that he should be able to hang around in the early going.

Stay Put, Jamie Theriot (20/1): Theriot has two wins on a sloppy track with this chestnut colt who won two races in December and January, then finished fifth in consecutive races in the Grade 2 Risen Star and Louisiana Derby. Another closer, Stay Put will likely be outclassed in the Belmont and not a factor at the finish.

First Dude, Ramon Dominguez (7/2): Dominguez set a modern-day record for victories at Belmont Park with 98 winners. He and Preakness runner up First Dude will likely be second favorite after Ice Box, and will start in the same position as the Preakness just three weeks ago. With First Dude looking like the only true speedster, he is a solid pick and likely to be the pacesetter in this weekend’s race. If he is able to get to the front early on, he may be able to hold out for a dash to the wire.

Interactif, Javier Castellano (12/1): Derby winning trainer Todd Pletcher’s late entry to the field is an impressive colt with some developing talent. The two-time graded stakes winner on the turf as a juvenile, returns to conventional dirt for the first time since July of last year. Pletcher was so impressed with his recent workouts on the dirt, and decided to take a shot in the Belmont. While this horse has talent, he has yet to show much heart.

$250 Free Bonus when you sign up at Sportsbook.com – CLAIM BONUS 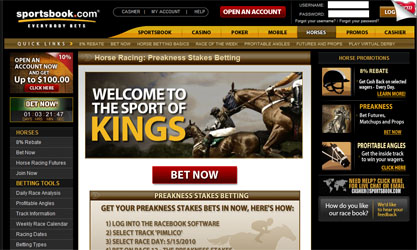