www.Bodog.com – Did you know you can bet on NCAA Football online?  Check out Bodog, which is America’s most popular online sports betting site.

Spread Predictions – I like Oklahoma State to cover the 4.5 point spread in this season opener game at home.  The Cowboys have one of the best offenses in the league with QB Zac Robinson who is a two way threat, RB Kendall Hunter, and WR Dez Bryant.  If the Cowboys get their running game going they will hard to stop – when they run for more than 200 yards Oklahoma State is 14-2 in the last two years.  Also note that Matthew Stafford isn’t around this year for Georgia.  Bet on Oklahoma State to cover the spread.

Over/Under 61 Prediction – Take the Under 61 on this game at -115.  Oklahoma State does have one of the best offenses, averaging over 40 points per game last year – but, I don’t think they will be able to score that many in their season opener against a tough Georgia team.  I also think Oklahoma will be able to hold Georgia to only a couple scores, controlling the ball with their offense.  Bet on Under 61 in this Georgia vs Oklahoma State match up.

Bet on this game, or any college football game, at www.Bodog.com <– Best online sports betting site in the US! 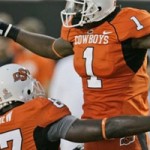