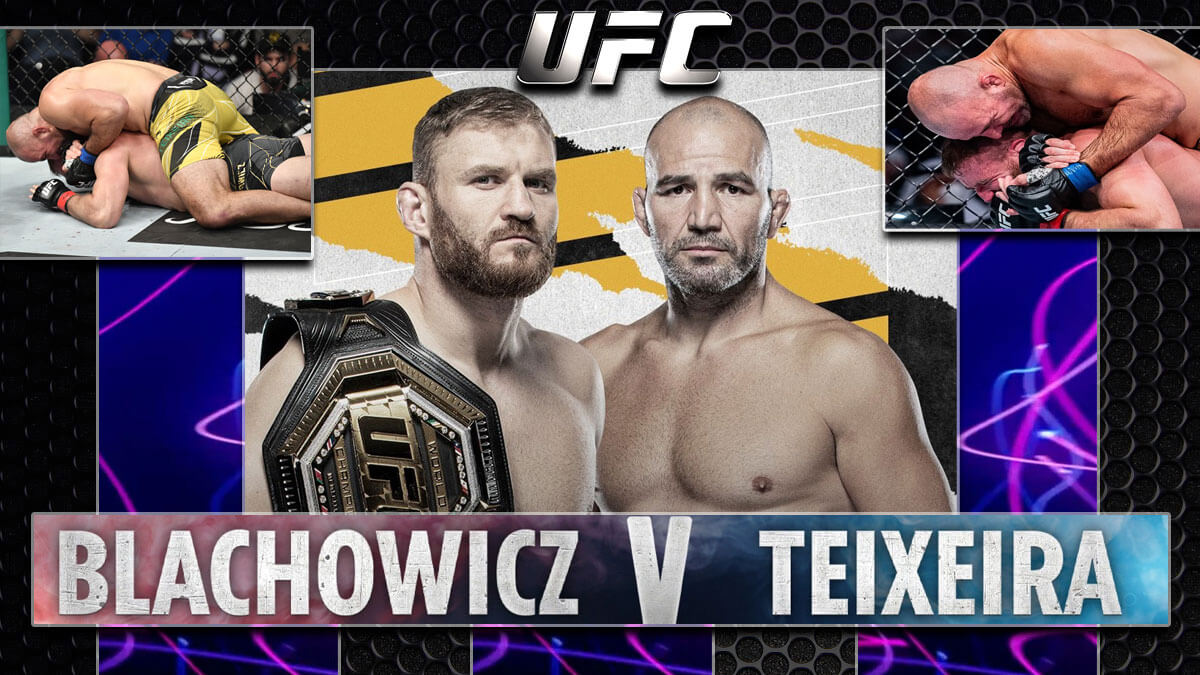 Many people thought that Glover Teixeira was done after going 5-5 from 2014 to 2017. That stretch started with a loss to Jon Jones at UFC 172 when he challenged for the light heavyweight title and ended with a unanimous decision loss to Corey Anderson at UFC Fight Night 134 as a 38-year old. But many were wrong.

Teixeira won his next five bouts including four stoppages to return to the top of the UFC’s 205-pound rankings. Even then, he had to literally plead to the UFC to give him another shot at the light heavyweight title after the promotion gave the first crack at Jan Blachowicz to middleweight champion Israel Adesanya. When the UFC finally gave him that title shot, the oddsmakers gave him little chance of winning the title he could not win seven years ago.

One week after Blachowicz defeated Israel Adesanya in his first title defense, the betting odds for a possible matchup between the Polish Power and no. 1 contender Teixeira. At that time, online sportsbook BetOnline listed Blachowicz as the -155 odds on favorite and Teixeira the +135 betting underdog.

After the bout was made official, Teixeira opened as the +200 betting underdog to beat Blachowicz and by fight night, his odds became a longer +240. The champion meanwhile, opened at -250 and closed as a solid -285 betting favorite. The odds of Teixeira winning via submission? +700 or just 12.5%.

Bettors also gave him little chance of beating Blachowicz. At the Caesars Sportsbook, 50% of the tickets and 86% of the betting handle were on Blachowicz at -300. The figures were the same with the other top UFC sportsbooks reporting 50% to 80% of the ticket and 80-88% of the handle wagered on the champion at minus money odds. Just before he entered the Octagon, the betting favorites for the UFC 267 event were 12-1. But as Teixeira would say after the fight, “never give up on your dreams”.

Glover Teixeira Believed in Himself

Teixeira made a statement early in the fight when he took Blachowicz down and kept him there for the entire round. The champion was able to establish his boxing in round two but Teixeira wobbled Blachowicz with a left hook and took him down again. This time around, the Brazilian was able to mount the Polish champion and take his back. It was pretty much over by then as Teixeira went for the choke and forced Blachowicz to tap. Just like that, the upset was complete and Glover Teixeira was champion at last.

At 42 years of age, Teixeira is the oldest first-time champion in the history of the UFC and the second-oldest fighter ever to win a world title after Randy Couture. The Brazilian joins Couture and Daniel Cormier as the only UFC fighters to win a world title at the age of 40 or older. The 14 fights between Saturday’s title win and his title loss to John Jones at UFC 172 is the most between title shots in the same division in UFC history.

The victory culminated nearly two decades of hard work for Teixeira who has been a professional MMA fighter since 2002. In 2008, he was on the verge of getting a call from the UFC when he had to return to Brazil because he was living illegally in the United States. With his visa issues, he was unable to return to the U.S. for four years, taking away his prime years as a fighter. Yet he never doubted himself. Now he is a world champion.