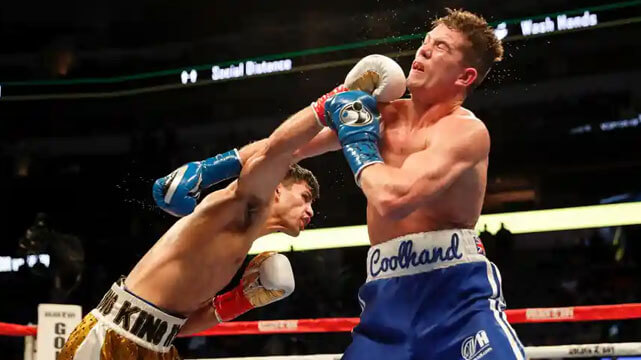 Ryan Garcia’s long-awaited return is booked and the rising boxing star is a heavy favorite to win the bout.

Garcia opened as the -1250 betting favorite to beat Emmanuel Tagoe on April 9th. Tagoe meanwhile hit the betting boards at +600:

The Garcia vs Tagoe bout is expected to take place at the Alamodome in San Antonio, Texas in an event that will be streamed live via DAZN. Garcia himself confirmed the bout with a social media post.

King Ryan is Back

April 9th I’m back on DAZN at the Alamodome In San Antonio Tx ?? pic.twitter.com/F6lhrcM6NH

The fight against Tagoe will be his first since defeating Luke Campbell via 7th round TKO on January 2 of last year in Dallas. In that bout, Garcia came back from an early knockdown to beat Campbell and become the interim WBC lightweight champion.

The 23-year old Garcia is unbeaten in 21 bouts with 18 knockouts. He is one of the most highly-touted prospects in the sport and is very popular fighter at the best boxing betting sites. This marks the 8th time in his last 10 bouts where King Ryan has been listed as a favorite of at least -1000. The exceptions were when he fought Romero Duno at -650 and Campbell at -400. He won both fights via KO.

Opposing Garcia will be former IBO lightweight champion Tagoe of Ghana who is coming off a majority decision win over Mason Menard in his U.S. debut back in November 20202. The 33-year old has not lost a bout since his pro debut and has a record of 32-1 with 15 knockouts. Tagoe was a heavy -500 betting favorite at the best boxing sportsbooks when he beat Menard.

We wish him a speedy recovery ?https://t.co/O4N2TycaDT

Garcia was supposed to fight Javier Fortuna last July 9th in Los Angles but withdrew from the bout in mid-April to “manage his health and well-being”. Fortuna ended up fighting Jojo Diaz and the latter ended up beating Fortuna and winning the interim WBC lightweight title.

There were rumors of Garcia facing Isaac Cruz, who gave Gervonta Davis a good fight before losing via majority decision last December 5th. However, the preliminary conversations between representatives from the two camps failed to come up with something. Former IBF champion Tevin Farmer was also mentioned as Garcia’s possible opponent.