Betting on the NFL is so much more than picking game winners. With over/under bets (also known as totals bets), you can wager on the flow of the game without worrying about picking a winner. It’s an excellent form of wager you can add to your winning strategy today. In this guide, we’ll discuss what NFL over/under bets are, talk you through real-world examples from past games, and show you how to place your first totals bet right now.

What Is an Over/Under or Totals Bet in the NFL?


Before we get into the details, let’s discuss terminology. Over/under bets are the same thing as a totals bets. The two terms are interchangeable.

An NFL totals bet is a wager on the cumulative number of points scored by both teams during a football game. The sportsbook sets the line at the total number of points they think will be scored by both teams collectively during the game. You have the option of betting if you think more points or fewer points will be scored. A bet on more points is called the over, and a bet on fewer points is known as the under.

How Over/Under Bets Pay out in the NFL

Occasionally, you will see a slightly different payout for over and under bets in the NFL. This occurs when the sportsbook wants to slightly deter action on one side of the bet without changing the line. You might see one side of the bet at (-120) and the other side paying out at even money.

Majority of the time, the payouts will be the same at (-110). But make sure you check each time before placing an NFL totals bet.

Sportsbooks will try their best to release an initial over/under line equal to the exact number of points scored in the game. Their ultimate goal, though, has nothing to do with being right. The primary goal is to get the same amount of money bet on each side of the wager. When this happens, they can pay the winners with the loser’s money and keep the house rake as their profit. It creates a no-risk situation for the sportsbook.

So, what happens if too much money is bet on the over or the under? Instead of adjusting the payouts as NFL sportsbooks do with moneyline wagers, they’ll adjust the totals number.

For example:
If the totals line is set at 49 points and too much money is being wagered on the over, they might shift the line to 49.5 or 50. As both teams would now need to score more points for the over to win, the over bet would be less attractive.

The sportsbook will continue shifting the over/under betting line up and down as needed to create the ideal no-risk situation for themselves.

Half Points – An Important Nuance of NFL Over/Under Bets

You may have noticed in the previous section that we mentioned the sportsbook can move the totals line to a half-point number. How is this possible if half points can’t be scored in the NFL? Remember, your choices with a totals bet are over or under the line, not equal to.

When sportsbooks choose to use half-point increments, you remove the chance of a push (tie). If the total is set at 46.5, you guarantee a winner. There will be either 47 or more points or 46 or fewer. The over or under must win. If the total is a whole number like 46, it’s possible there will be a tie if exactly 46 points are scored.

Let’s look at a few examples of over/under bets from recent NFL football games to drive home how these wagers work.

In a recent matchup between the Cardinals and the Ravens, the sportsbooks set the totals line at 47 points. If you chose to bet the over, you were looking for a total of 48 or more points to be scored. If you chose the under, you were looking for a cumulative points total of 46 or fewer. If exactly 47 points were scored, the bet would be a push, and your money would be returned with no win or loss.

The total points scored by both teams was 40. If you bet the under, you’d be a winner in this game.

As totals bettors, we couldn’t care less who won the game here. The total points scored was 54. This is higher than 46, which means over bettors were the ones cashing tickets.

Our last example was a matchup between the Dallas Cowboys and the Washington Redskins. The totals line was set at 43.5, ensuring there would be no tie. Over bettors were looking for 44 or more total points, and under bettors wanted 43 or fewer.

The total points scored by both teams together was 52. This was a win for over bettors and a loss for those that chose the under.

Where Can I Bet NFL Totals Bets?

Any quality online sportsbook will have totals bets available for all major NFL games. Some of the best options we recommend are linked below:

Online betting sites are notorious for having reduced juice wagers on select NFL totals bets which is an awesome promo. When this happens, both sides of the wager pay at (-105) instead of (-110). This change in odds means a $10 bet will pay $9.52 instead of $9.09. It’s a $0.43 difference which might not seem like much. But if you extrapolate that out over a large number of totals bets, it’s a huge deal. 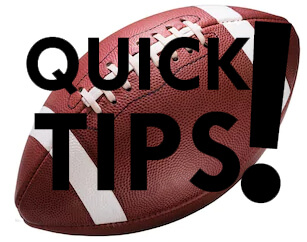 We’ve covered a lot of useful information on totals bets today. But this page on over/under bets is just the tip of the strategic iceberg. To master totals bets and beat the sportsbooks betting on the NFL, you must continue to learn and refine your strategy. We’ve included a lengthy list of some of our favorite featured guides below. All of these resources are available to you free of charge.