The Super Bowl has long been a major point in the year for sports bettors, both professional and recreational! Every year, it seems that the total betting handle for the Super Bowl gets larger and larger. This comes as no surprise seeing as how this has become one the most popular sports betting events of the year for so many people in the US.

Jump Ahead – Contents of Our BetUS Review

Originally conceived as an exhibition matchup between what was then the National Football League and the American Football League, the Super Bowl has exploded from a secondary football contest to the world’s most-watched sporting event.

Over the decades, added elements of production value and an increase in football consumerism have made the Super Bowl a polar opposite of what it was upon its debut in the late 1960s.

This uptick in consumerism can be measured in the betting world, as professional football as a whole has worked in a form of symbiotic relationship with the gaming industry.

As the biggest sporting event on the planet has grown, so has the infatuation to bet on it.

Betting on the Super Bowl has become such a common thing to do that the entertainment capital of the world benefits from it in the form of tourism, as countless sports bettors flock to Las Vegas from all over the world to get in on the big day’s action.

This has caused the gambling scenarios and ensuing ramifications to become its own theme of the game itself, just as Super Bowl prop bets, commercial variety and halftime entertainment have become over the years.

Believe it or not, the Super Bowl was held for about 20 years before propositional bets were introduced to the event.

Super Bowl XX took place on January 26, 1986 and featured the Chicago Bears and the New England Patriots. On a whim, some NFL bettors placed a prop bet that the Bear’s William “The Refrigerator” Perry would score a touchdown at some point during the game.

The original odds for this bet were listed at 15-to-1 and bettors everywhere with money on the line for Perry to pull off this stunt were extremely satisfied when “The Refrigerator” found himself late in the third quarter with the ball in the end zone!

NFL bettors have continued ever since with prop bets that have become more varied and elaborate over the years. What exactly do prop bets for the Super Bowl look like?

Here are some examples of the most popular prop bets that are placed each year at the Big Showdown:

The National Anthem
There are a ton of ways that you can go with this one. There are over/unders on how long it will take the singer to complete the national anthem as well as betting on whether on not any players will take a knee. We have also found that there are a lot of wagers placed on what kind of outfit that the singer will be wearing or if they will make some sort of mistake as they sing the Star Spangled Banner.
The Coin Toss
This is another bets that is riddled with all kinds of possibilities. Will the coin land on heads or tails? What team will actually win the coin toss? Will the winner of the coin toss also win the game? Will the AFC or NFC team win the toss? And the possibilities go on and on and on!
The Halftime Show
Here is another golden opportunity for making bets even though the game is on pause. You can bets on things like what kind of outfit the performer of the Halftime Show will be wearing or if they will make some sort of political statement. Bettors can also wager on things like how many songs will be performed or if a brand new song will be featured during the performance.
The MVP Winner
Even though the Super Bowl MVP is usually always a quarterback, there have been times where this has not been the case! And this creates the conditions for some great prop betting opportunities. You can simply place a prop bet that the MVP winner will not be one of the two teams’ QBs.
The Gatorade Shower
Prop betting on the Gatorade shower could include betting on whether or not the cooler will contain Gatorade or water as well as what color the Gatorade will be or if there will even be a Gatorade shower period.

Here are some great factors to keep in mind before making your Super Bowl prop bets. These are based on research conducted over the years and could be your key to more well-informed bets while betting on Sunday Funday.

A great place to begin would be to look at each Super Bowl since 1967 and examine the final scores, odds, and against-the-spread data. A pattern you might notice is that nearly all outright winnings teams cover their points spread. There have also been 28 victories by favorites, 23 victories by underdogs, and a total of 2 pushes. It’s also just interesting to look at some of the biggest point spreads in Super Bowl history and see the end result of those games.

These are the results from each Super Bowl looking at the favorite vs. the underdog and over vs. under. From this data, it is always best to bet on a favorite at the Super Bowl as they have gone 36-19 straight up and 26-25-2 against the spread. When it comes to betting the over/under, that is a complete and total wash with the number sitting at 26-25-1. There is a slight lean toward betting over, it is really anyone’s guess when it comes to totals betting.

These are some of the biggest moments in the history of the Super Bowl and how they affected bettors. Sometimes, it is good to look at the past to get an idea of what to expect in the future. A lot of this information covers things like the Super Bowl spreads history and past Super Bowl spreads and can come in handy as you are putting together your bets for the big game!

Against the Spread Margin Within One Score

The Super Bowl is the game of the season that all avid bettors and football fans look forward to with rapt anticipation and one of the best ways to bet on the Super Bowl is with totals betting! This is also referred to as over/under betting.

As recent as 2019, we had the lowest-scoring Super Bowl of all time with 16 points when the Patriots won against the Rams. But the year before that, the Eagles and the Patriots scored a combined total of 74 points! When it comes to the total number of points scored by both teams combined, it is really a mixed bag and anyone’s guess!

Going back to the most recent Super Bowl, let’s take a look at the types of bets that saw the biggest payouts when the Tampa Bay Buccaneers defeated the Kansas City Chiefs 31 to 9. These were the biggest bets in Las Vegas-based sportsbook for Super Bowl LV.

How Super Betting Will Change in the Future

With technological growth moving at such a high frequency, the football gambling world has done a fine job of staying neck-and-neck as the use of mobile sports betting apps is seeing its greatest relevance yet. 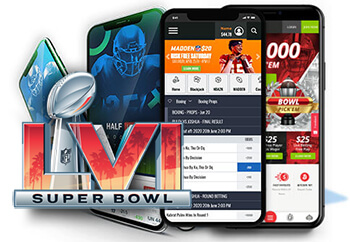 While the functioning of these betting apps for a multitude of markets continues to see a gradual increase, their operation has helped further boost football betting into the public eye for both experienced bettors and novices.

All of these apps and their respective football betting sites are known for being trustworthy and well-run.

With fluid customer satisfaction and consistent web accessibility, these online betting sites have become reputable in the sports wagering community with their rise in popularity highlighting that.

To further emphasize the safety aspects of these sports betting sites and mobile apps, we have tested our selected markets ourselves.

NOTE: With the usage of the internet greatly impacting the betting history of Super Bowl betting, it must also be noted that the location in which the event is wagered has also seen a shift in importance.

One of the best pieces of advice we can give you for betting on the Super Bowl is to learn as much as you can about each of the NFL teams and individual players that you want to place bets on. The more that you know and the bigger of a picture that you can capture of what is going on, the more nuanced and better-informed your wagers can become which means a great likelihood of winning more often than not! We also advise you to bet on what is most familiar to you. Do not bet too much money on games and players you don’t know too much about.
Looking at the numbers, we feel it is more difficult to bet the over/under on the Super Bowl because it is a completely mixed bag. It is about dead-even the number of Super Bowls that went either way in the category. Focus more on the favorite-underdog bets because you have a much better chance at winning these bets.
This all depends on which betting lines and odds that you place bets on. You will want to place bets on sharp Super Bowl betting lines and look for opportunities to fade the public and bet with the pros where there could be an upset opportunity. Those are two great ways to win good money. How much you win is also dependent on your resources as well. If your bankroll is well-funded, you can take larger risks in the pursuit of larger wins! Be sure to use online bonuses and promotions to get your account fully funded and ready to roll!
When it comes to betting on the Super Bowl, you are 64% likely to win betting on the favorite. It is not a guaranteed win but you have a good shot at being on the right side of the curve when you bet the favorite.