Running styles ranks as one of the most underrated tools in all of horse racing betting. When you know the styles of each Thoroughbred horse in the race, you can visualize how the race will play out from the time they leave the gate to when they hit the finish. And once you know that, you’ll also have a pretty good idea of how to bet.

In the world of betting on horse racing for money, the wagers themselves create a lot of excitement. You’ll rarely find a horse racing fan who doesn’t also enjoy placing bets on the outcome of each race.

And many of those bettors use their own special method for picking the horses they think will come out on top.

While there is no method that stands out above the rest, some of the strategies used require a lot of work on the handicapper’s part. If you believe that horse racing form is the most important thing, you’ll spend a lot of time going through programs for every bit of information.

You can also spend a lot of time judging horses based on their class, who their jockeys and trainers are, and many other factors.

But many people overlook the importance of how each horse chooses to run each race. For the most part, each Thoroughbred horse tends to settle into a certain style of running each race.

When you compare the styles of all the horses in the race, it can lead to great betting opportunities!

The good thing about using running styles as a way of coming up with effective real money horse racing wagers is that it is easy to determine. 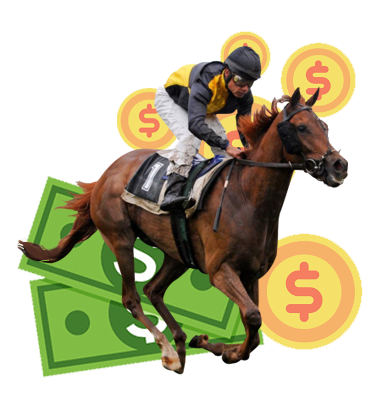 Usually, you can tell simply by looking at the program and looking at a horse’s positioning in each part of the race.

Once you have this figured out, you can really diagnose a race from start to finish and get a good idea for the horses that stand out.

In the following article, we’ll go in-depth to talk about the method of using running styles to make solid horse racing bets.

Finally, we’ll look at how you can determine what a horse’s running style is and how to compare with others in the race.

What Are Horse Racing Running Styles?

Here’s the basic way to use horse racing running styles in your betting:

You can use that to then make wise wagers. More on that to come. First, let’s talk about the three main running styles of Thoroughbred races horses.

You’ll sometimes hear front-runners referred to as “speed horse” or “rabbits.” The basic idea is that these horses like to go hard right from the beginning of the race.

When they perform well, it is often because they immediately made the lead and kept it all the way through.

If front-runners get shuffled to the back of the pack early, they will likely have a hard time closing in on the other horses in the race.

As a result, jockeys of these horses will try to make sure to push them early in the race. That might even mean taking them wide around an early turn just to get to the front.

Speed horses will always prefer to have an uncontested lead, but some of the best of them can simply outrun other speed horses as well.

One of the great things about having a front-running style is that a horse doesn’t have to worry about as many variables as those with other styles. They can just run out to the front and, if they’re on their game, leave everybody else in the field behind.

Horses that stalk the pace are ones that leave the gate well but aren’t so determined to get to the front. Instead, they prefer to sit right behind the pacesetters, whether that happens to be one horse or a group. The stalker will try to get a breather and draft behind the leading horses to save energy.

When the appropriate moment of the race arrives, the stalking horse’s jockey will then ask it to make its move. This might happen at a different point in each race, depending on how fast the pace is or how many horses are close to the lead.

The idea is that once the jockey asks the stalking horse to go full-bore, it can ideally sweep past the tiring leaders.

Perhaps more than any other style, the stalking style relies on the skill of the jockey to have the right timing. The jockey also has to avoid getting caught right behind a leader who tires fast, since that will slow the momentum of the stalking horse and could cause it finish far back.

Stalking horses tend to be versatile enough to adjust to the way the race takes shape in front of them.

A closing horse, or closer, is one that sits well back off the pace at the beginning of the race. As a matter of fact, it might even sit back for a good portion of the race, conserving as much energy as possible. 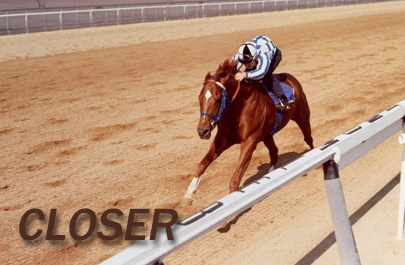 If you’re watching a closer and you don’t realize its running style, you might think it has no chance whatsoever as it sinks to the back of the pack.

But the good news is that closers have the ability to make up a lot of ground in a short amount of time. This type of horse will start to really get cooking just as some of the horses near the front of the pack begin to tire.

And if enough of them tire and the jockey times the move right, the closer can sweep past everyone to come up and win.

The main drawback for closers is that they are very reliant on the race breaking their way, more so than the other horses who like to be speed horses or stalkers. A very slow pace, for example, really works against closers.

In races like this, the horses up front will have more of a chance of sustaining all the way to the end of the race.

Using Running Styles in Your Betting

Now that you know what all the running styles are, it’s time to show you how to use them in your real money horse racing bets, whether you’re at the track or using top horse racing betting sites.

The key is to take the race as a whole, pinpointing each running style and trying to tell which kind of race it will be.

Take a look at some of the possibilities:

What you’ll notice from all three of those examples is that it’s usually best to have a style that differs from most other horses in the race.

If the horse in question is like a lot of other in the field in terms of its style, it most likely will make it difficult for the race to play out and favor that style. It also could lead to traffic issues during the race.

The more you utilize running styles to make your bets, the better you’ll get at doing it. And you’ll also find that it’s one of the easier handicapping strategies to implement. Let’s take a look at how you can do that.

How to Determine Running Styles of Thoroughbred Horses

For big stakes races like the Kentucky Derby or one of the Breeders’ Cup races, there will be a lot of analysis of different horses’ running styles to help you in this department.

But it’s a good idea to learn how to identify the styles on your own for the races where you won’t be getting that help.

The obvious way to do this is to watch a lot of horse races.

If you’ve witnessed a horse running in different races over time, you’ll know whether or not it likes to jump out early to the lead, sit just off the pace, or try to fly up at the end. You also should be able to tell how well it does when faced with different pace circumstances.

But let’s face it, it’s unrealistic to expect a horse racing bettor to watch enough races to know the style of every horse in the races they’re betting.

Luckily, tracks provide racing programs or forms which can tell you all you need to know about racing styles in past races for each horse.

Each horse will have a section of the race page devoted to it. And the main part of this section consists of how each horse performed in its most recent races. The important part of this, in terms of running styles, is determining where a horse was at each part of the race.

This performance line is telling you that the horse left from post position #7. In the early stages of the race, it was fourth. It was then fifth, third, and second as the race progressed, eventually finishing second.

The little numbers on the top right indicate how far off the lead the horse was. For example, the horse in question here finished second just one length back of the winner.

How do we determine what the running styles are based on a program? Take a look:

It’s important to factor in the distance of a race into your handicapping if you’re using running styles. This is especially true if you have horses that are switching up distances.

For example, closers do better with longer races. They have more time to make their late move and catch up to the leaders who are tiring if there is more distance to cover. As a result, look for closers to do better if they stretch out their distance from previous races, especially if they have been making up ground on the leaders late.

As for speed horses, they usually do better with shorter distances. Look for front-runners who may have tired late in previous races that are shortening up their distance for the current race. That could be the distance that suits their style the best.

The key to horse racing betting is identifying undervalued assets. These are the horses who should perform much better than what the pari-mutuel betting pools suggest they might. And you can use running styles to find these horses.

The key, as we said above is locating the odd horses out in a race. If there’s just one deep closer, one speed horse, or one stalker, they should have a big advantage. And it could allow them to outperform what their form might otherwise indicate.

Exotic wagers like the exacta, trifecta, and superfecta force bettors to pick the order of finish for multiple horses in a race. You can really use running styles to help you in this effort. That’s because running styles, more than any other handicapping tactic, let you visualize what might happen during the race.

You can see which horses are likely to be fading as they approach the wire, which would hurt their chances of finishing in the money. And you can also identify the horses who might be rallying just enough to finish second or third. Many bettors use running styles to figure out the horses who should be included on exotic tickets in addition to the likely winner.